"On the plains of Oklahoma, with a windshield sunset in your eyes like a watercolor painted sky, you'd think heavens doors have opened."
Fly Over States

Dare to Be Ugly

Okay, I am working on the HGTV Message Board "Dare to Be Ugly" Challenge. The gist of the Challenge is that a Hostess, who clearly has either a mental condition or a mean streak, bought some butt ugly fabric and sent it to all the fools who thought it would be a fine idea to try to make something gorgeous out of it. She sent us a half yard and the rules of the Challenge are that we are to use 90% of the fabric and can’t get more. As if we would want to. According to the rules, I won’t be able to reveal what I am working on until about Thanksgiving. But that doesn’t mean I can’t show you the ghastly stuff and let you suffer along with me. 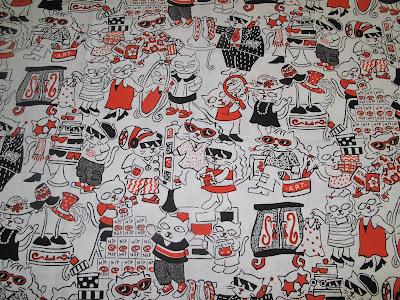 Now, don’t get me wrong. I really like cats. But I don’t consider myself to be a “cat” person although I fully intend to get a cat when we get back home to Oklahoma. A barn cat.

I read somewhere that dog people who buy fabric with dogs on it are very specific about wanting dogs that look like THEIR dogs. I haven’t found any Samoyed fabric but that would be abundantly cool. Cat people, so the theory goes, will settle for any old picture of a cat. Which may explain this fabric and why some people think it is cute. Oh gag me.

But I digress. Truth be told, even if I was a dyed in the wool cat person, I would still think it is ugly. Can I get an Amen?

In the first place, I don’t like directional fabric. 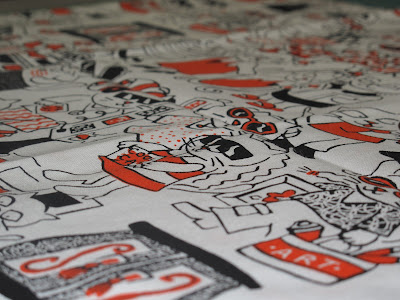 So there is that.

In the second place, most of the cats have their eyes covered with sunglasses or stars or something. 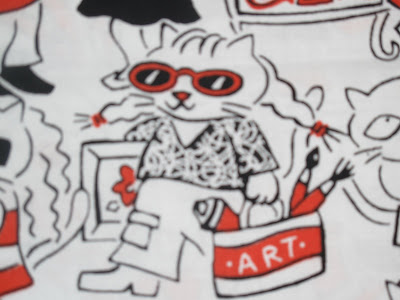 I think that is creepy. It is like they are on drugs or something. And if you look at the ones with eyes that show, their pupils are just dots which furthers my theory that this is a fabric with stoned cats on it. I say, “SAY NO TO DRUGS!” It is a little hard for me to get behind using fabric that promotes illicit drug use (or prescription drug abuse).

If illicit drug use/prescription drug abuse was all this fabric was pushing, I might be able to overlook it. But seriously, it even looks like they packaged it for little kids and called it Nip Nap. 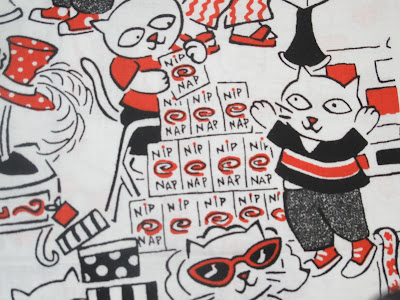 That is just wrong.

And I am fairly certain that at least one of the cats on the fabric is a pimp. I mean, just look at him: 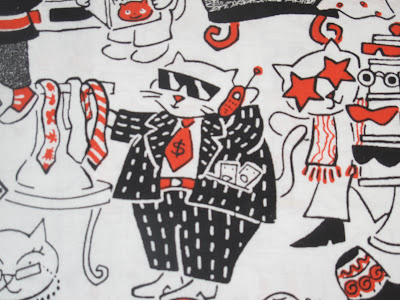 Look how he is pocketing all the hard earned money he grafted from his stable.

And that guy behind him with the scarf and the shoes? There is something seriously twisted about him. He looks like a pickpocket and while I don't condone thievery, I can't say as I'd lose much sleep over the pimp getting ripped off. 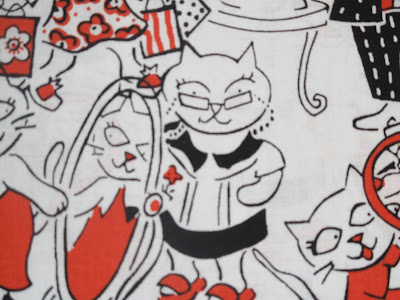 And look at that shameless hussy admiring her sin laden self in the mirror.

If you aren't convinced this is an assault on the morality of quilters everywhere, look at this guy: 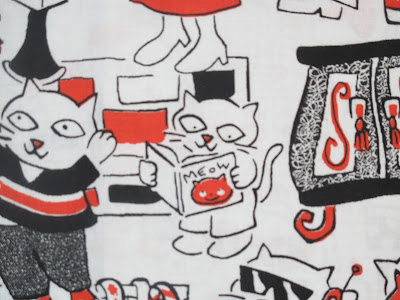 K*tty p*rn if I ever saw it. (asterisks added to keep p*rverts from searching and finding my blog - I'M WAY AHEAD OF YA, BUBBA!!).

It gets worse and worse.

So I tell myself that I am being too negative and there is bound to be something I like about this fabric. 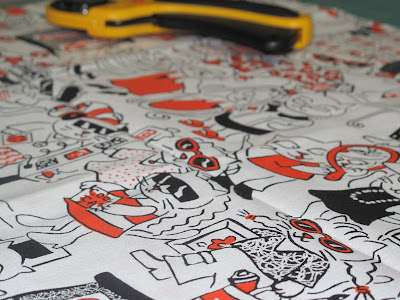 Well, I am glad there isn’t a whole yard of it.

Upon reflection, I also like the colors. I like red, white and black (RWB) and had been planning to do a project with those colors in it for a long time. I hadn’t planned to use something like THIS for it, however. Do I want to “waste” my dream of a RWB quilt on this fabric?

Okay, so I go grab up my tenderly hoarded RWB stash and stand there stunned.

The Ugly fabric isn’t red. It is Orange. 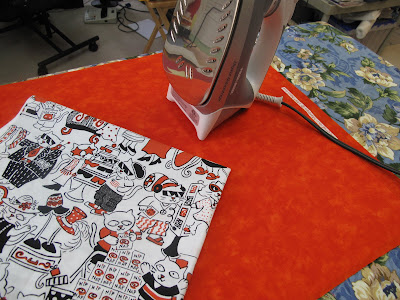 ORANGE!! As if I have orange in my stash. Now I have to go buy orange fabric. And DON'T assume that orange fabric next to it in the picture is part of the project. I honestly am just using it in this picture to show you that it really is orange and not red.

Now, if you are from Oklahoma and an Oklahoma State Cowboys fan, things would be looking up. Their colors are orange and black. And in fact, my son-in-law graduated from OSU. That being said, I don’t see using this fabric to make him something. I love my SIL. He is good to my daughter. I can’t saddle him with this just because of his tawdry OSU past.

We aren’t supposed to talk about our design ahead of time so I will stop now other than to confess that I am well on the road to completion (I had to do something over the weekend when the internet was down - heaven forbid I might actually SEW). Here is all the nasty stuff I have left: 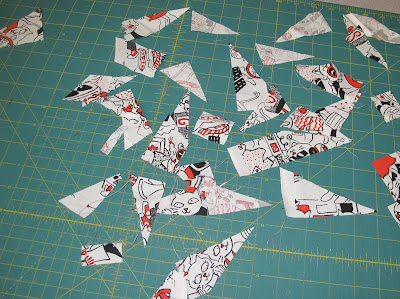 Let me just say that all those smug cat people who think they have a leg up in the Dare to Be Ugly Challenge just because they think this rag is cute – look out! These cats may be cute to you but the mentally healthy among us recognize ugly when they see it. And will design accordingly!!

Posted by Lady Beekeeper at 9:47 AM

Penny! You are missing your calling! I love to read your blog even if I dont reply a lot...You do have a way with words!

You should write a book of some kind woman!

I love your ctitique of this fabric..Makes me look at it in a whole new way.. LOL

Oh my goodness. The man and I do believe a man designed this FABRIC(am I allowed to call it that?), has an underlying meaning for this cloth. Why, because he plays up the male cats and puts down the women by making them all look "catty". Shame on him. I can't wait to see what you do with this ugliest fabric I ever saw. Like your funny comments. A fellow OK person and by the way, yeah Cowboys and OSU. Sarahe4e

OOPS! Forgot to say he must be a man WHO HATES WOMEN! Sarahe4e

Thank you for revealing to me just how close to disaster I came...I almost signed up for this.

I agree with Thearica, you have a special way with words and should write a book. I love reading your blog about your dogs but this was really funny! I'm so glad I didn't sign up for it, sorry quiltaholic, but it will be fun to see the finished projects.

You cracked me up with the "pimp" comment! Is this an organgy red, because on the computer monitor it looks almost pink or orange.

You definitely have a hearty AMEN from me. What about using it to line a cloth grocery sack?

Penny you are hysterical! This cracked me up!!!

I'm more a dog person than a cat but I do love my kitties. This fabric doesn't fall under my ugly category but I think you are absolutely right about one thing....that cat is definitely a pimp!

Can't wait to see what you've made with this stuff :)

Now after you work on the cats, you just might want to order this fabric...and make something for the girls
http://www.hotdiggitydog.com/samoyed/samoyed2.htm

This is my favorite place to visit each morning!! Thanks!

My ugly is all cut apart too! I do believe you spent too much time analyzing this fabric! But I have to say...I thought they exact same thing about the p!mp and the nipnap!!

Penny, I am definitely a cat person, since I share my home with three Maine Coon cats (and still yearning for a Samoyed puppy). And I'll fervently give you an Amen about that hideous fabric. Good luck with the quilting challenge!

i have to say i'm giggling hysterically with tears in my eyes. i'm NOT a cat person...cats are for living outside and killing the nasty things i don't want to encounter in my garden, period.
the fabric is hilarious...but even better with your narrative. i think i might even like it.

This is absolutely hysterical!! Laughed so hard my sides hurt. You could slay them in the courtroom with your wit. :D Great great post. :)

I just wandered over from Pigtales and Quilts. This is hysterical, I was absolutely laughing. 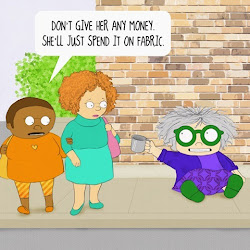 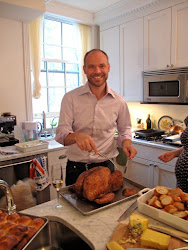 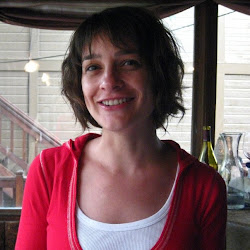 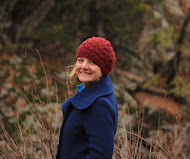 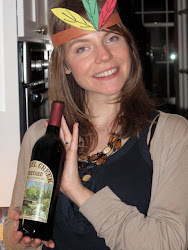 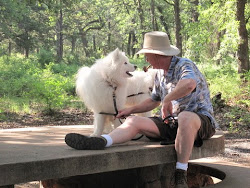 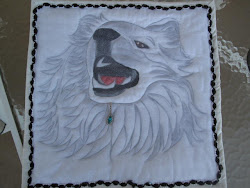 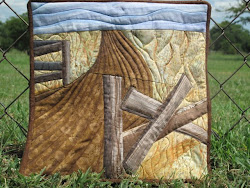 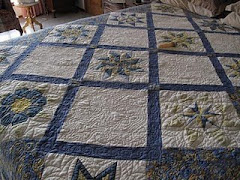 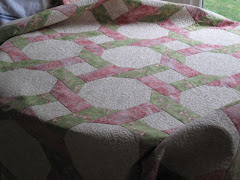 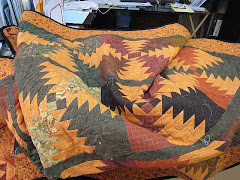 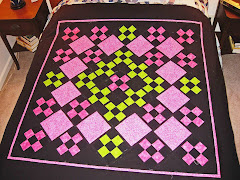 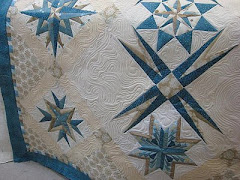 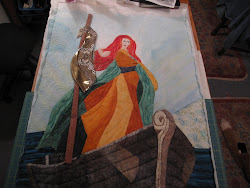 Lady and the River 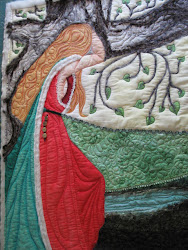 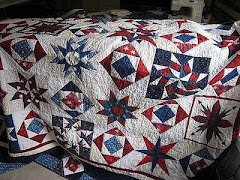